Today’s recommendation on the USD/TRY

Risk 0.50%.None of yesterday’s buy or sell deals were activated

Entering a sell deal with a pending order from the 18.33 levelsPlace the stop loss point and close the lowest support levels 18.55.Move the stop loss to the entry area and follow the profit with the price moving by 50 points.Close half of the contracts with a profit equal to 55 points and leave the rest of the contracts until the strong resistance levels at 17.70.

Entering a buy deal with a pending order from the 17.98 levelsThe best points for placing a stop loss close at 17.74 levels.Move the stop loss to the entry area and follow the profit with the price moving by 50 points.Close half of the contracts with a profit equal to 55 points and leave the rest of the contracts until the support levels 18.31Advertisement

Analysis of the Turkish Lira

The price of the Turkish lira declined against the dollar, during the early trading today, Thursday, where the pair is trading near the highest levels it recorded during 2022. Negative factors are coming together to put pressure on the price of the lira, given the Turkish Central Bank’s stimulus monetary policy going against the tight monetary policy followed by Central banks around the world. This together with an excessive inflation rate that the country has not seen for about a quarter of a century.

The expectations are still pessimistic as any positive effect of economic data or reports about the country’s economy will be swallowed. The latest reports revealed the recovery of tourism in the country after a period of stagnation that extended from the pandemic during 2020 until the middle of last year, recording good figures for the number of tourists in the country during the current period. It seems that the weakness of the lira is like a general attraction for a large number of tourists, as the number of foreign visitors increased by 53 percent on an annual basis during last July. Despite the good report, in the long term it will not have the great effect necessary to revive the Turkish lira from its weakness.

On the technical level, the USD/TRY rose to its highest level during 2022, the pair traded at the top of a narrow trading range and has been stable within it since the beginning of this week, which is illustrated by the chart. USD/TRY is also trading above the 50, 100 and 200 moving averages respectively on the four-hour time frame as well as on the 60-minute time frame, indicating a long-term upward trend. The pair also traded above the support levels which are concentrated at the levels of 18.07 and 17.98 respectively, and trading below the resistance levels at 18.16 and 18.33 respectively.

The chance of the lira rising against the dollar is still weak as the pair is moving in a generally upward direction. As every decline for the pair represents a good opportunity to buy, please adhere to the numbers in the recommendation while maintaining capital management. 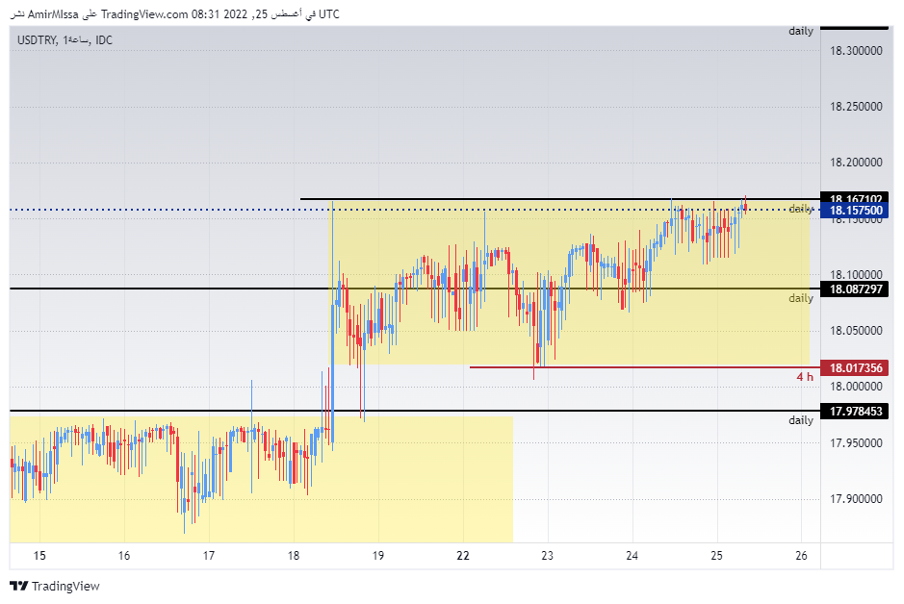